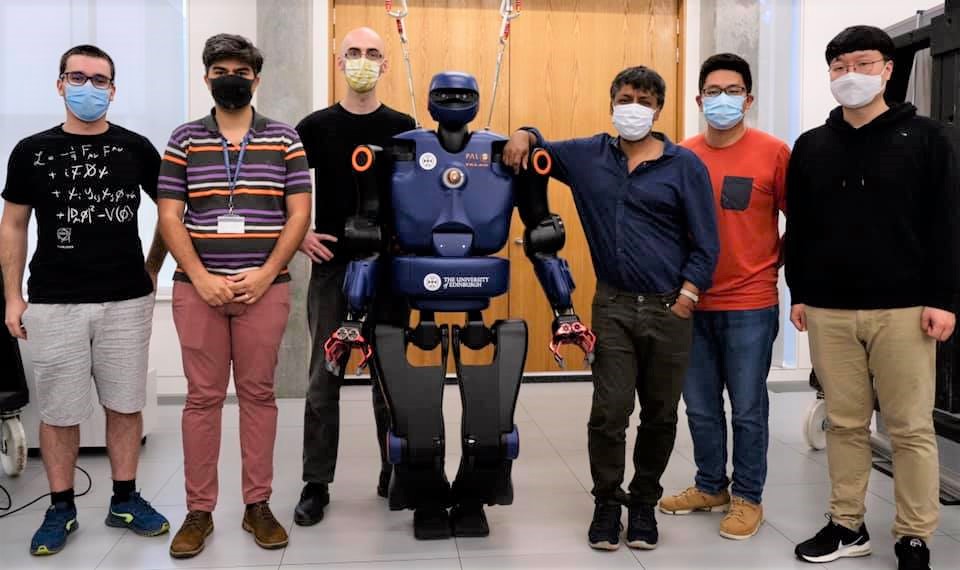 TALOS, our biped humanoid research robot, has been introduced into the team at the Statistical Learning and Motor Control Group (SLMC) as part of the University of Edinburgh Centre for Robotics, and will take part in research on all aspects of robot motion synthesis.

The Statistical Learning and Motor Control Group was set up in 2003 when Professor Sethu Vijayakumar moved from the University of Southern California to take up a tenured faculty position at the University of Edinburgh. He is also the co-founder of the Edinburgh Centre for Robotics, a world leading centre for excellence in Robotics and Autonomous Systems since 2015.

The SLMC research group studies all aspects of robot motion synthesis, from planning and representation to actuator design and control. In their work they employ techniques from fields including: probabilistic inference and learning, stochastic optimal control, reinforcement (and apprenticeship) learning and large-scale optimization.

As well as TALOS, the group also uses a wide range of other robots such as fixed bases and wheeled and legged platforms, including the NASA Valkyrie humanoid. The team’s work is crucial to tackling real world and real-time problems in anthropomorphic robotic systems.

We had the chance to talk with the team at the University to hear more about their research work, the group’s highlights to date, their vision for the future of robotics, and their plans to put TALOS to work!

The SLMC research working with fixed base, wheeled and legged robots

The SLMC group has been at the forefront of developing machine learning techniques targeted at online, incremental planning and control of high degree of freedom robotic platforms for fixed base, wheeled and legged systems. A key to their approach is data driven methods for learning and adaptation, and the team conducts research within the following themes:

Collaboration with NASA Johnson Space Centre and other highlights

One of the team’s highest profile and most prestigious projects has been the collaboration with the NASA Johnson Space Centre on the Valkyrie Humanoid since 2016. Professor Vijayakumar told us “this is the only NASA humanoid platform outside of the USA, on which we conduct research on loco-manipulation on uneven terrain and whole body motion planning with punctuated autonomy.”

Some of the work the SLMC group has carried out on bridging probabilistic inference techniques to stochastic optimal control and classical reinforcement learning, has been acknowledged with awards internationally.

Other key work for the group so far has included:

We asked Professor Vijayakumar what the University’s aims were for TALOS. He told us,  “our team will be using TALOS to conduct research on multi-contact loco-manipulation in such challenging humanoid platforms. TALOS will help us validate some of the recent algorithmic advances in hierarchical long horizon motion planning, novel MPC techniques for hybrid problems such as foot step selection, contact optimisation and multi-objective trajectory optimisation, as well as some sensory integration strategies for state estimation and localisation.

We are keen on developing Shared or Punctuated Autonomy paradigms on the platform, where a user can provide high level, immersive target goals/feedback to the robot without direct line of sight and the robot can achieve significant robust autonomy in achieving a desired task.”

The SLMC team are particularly excited about the inverse dynamics controllers, torque based motion command capabilities and an extremely generous range of motion.  Professor Vijayakumar explained “We have even upgraded the IMU sensors on the torso of the robot to hopefully enable us to improve state estimation and drift compensation during long horizon loco-manipulation but also enable us to tackle more dynamic movements.

Our field robotics living lab is equipped with many complementary platforms, 2-axis large area hoists, as well as some mock up navigation circuits including slopes and steps on which we intend to push (pun intended!) the capabilities of TALOS and co-develop further developments in collaboration with PAL Robotics.”

Challenges in robotics such as increased Human-Robot Interaction

We asked Professor Vijayakumar what challenges the team faced that TALOS would help solve. He replied, “humanoid robots are extremely challenging systems due to the bipedal nature, requiring real-time, extremely reactive planning and control, but the integration into a compact form factor with on-board computer and power makes it even more challenging.

Our team will be using TALOS to conduct research on multi-contact loco-manipulation in such challenging humanoid platforms. TALOS will help us validate some of the recent algorithmic advances in hierarchical long horizon motion planning, novel MPC techniques for hybrid problems such as foot step selection, contact optimisation and multi-objective trajectory optimisation, as well as some sensory integration strategies for state estimation and localisation.

We are keen on developing Shared or Punctuated Autonomy paradigms on the platform, where a user can provide high level, immersive target goals/feedback to the robot without direct line of sight and the robot can achieve significant robust autonomy in achieving a desired task.”

Regarding challenges in robotics, Professor Vijayakumar explained, “safe and compliant actuation while maintaining high levels of precision is a classical challenge in robotics. This is becoming even starker and more urgent now that we intend robots to interact closely with other robots, people and in our everyday unstructured environments. Reducing the sim-to-real gap by effective use of digital twins is another challenging domain, since we need this to ensure that we can develop and test algorithms extensively under extremely diverse circumstances.”

Human-Robot Interaction, in particular with exoskeleton systems and prosthetics, is another domain that brings its own challenges. The group explained, “effectively deploying shared autonomy in blended control systems is another challenging area, especially when you have humans interacting with robots, in wearable exoskeleton systems or in active prosthetics and orthosis.”

The future roadmap of robotics and robots in catering, industry and care homes

In response to how they see the robotics roadmap changing in the near future, the SLMC team explained, “robotics is extremely interdisciplinary – both in terms of the expertise it recruits to create a successful product, but also in the range of application domains. We are already seeing democratisation of mature technologies in robotics like surveillance and mapping with drones, more general purpose arms and grippers for co-bot applications, as well as integrated sensing and perception systems. This will open up a host of new deployments across traditional and non-traditional robotics domains – we are already seeing examples in catering, agriculture, care homes, asset inspection and the nuclear industry.”

Areas the group see already playing a more integral role include, they explained, “development of novel modalities or technologies of sensing, as well as cloud-based computing on the edge. As they push the new science and capabilities in making systems more reactive and robust, this will open up even more previously unexplored applications that are hard to predict at the moment.”

We would like to thank the Statistical Learning and Motor Control Group and Professor Sethu Vijayakumar for taking the time to talk with us. Find out more about the group and their work by visiting their website. To learn about the capabilities of our biped humanoid robot TALOS, take a look at our website. Finally, if you would like to ask us more about TALOS as a research platform, do not hesitate to get in touch with us.