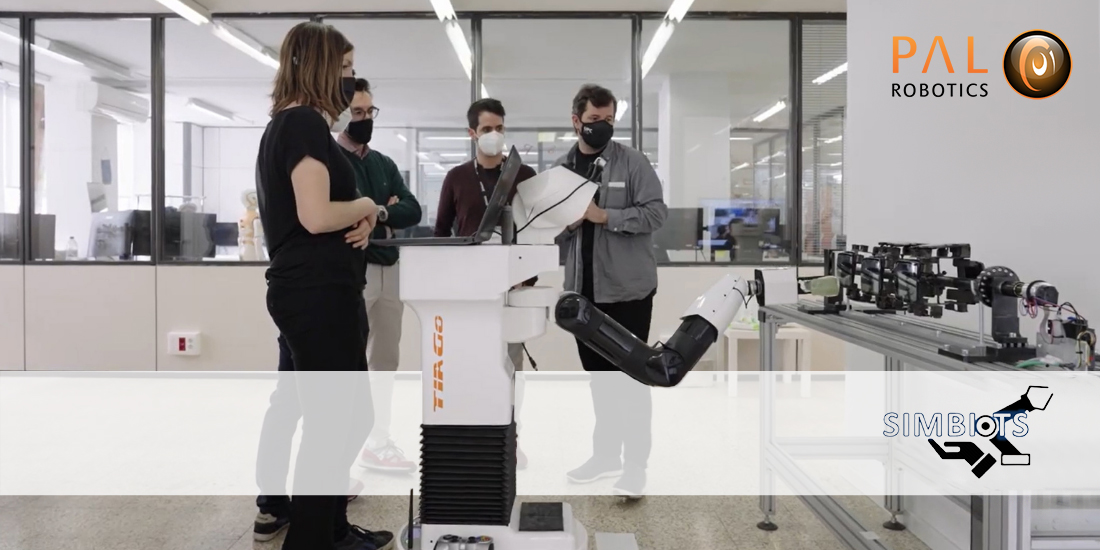 Collaborative project SIMBIOTS that PAL Robotics is a project partner in has enabled developments important to industry 4.0 –helping robots to work more emphatically and smartly with human workers. SIMBIOTS, which recently reached its end date, has worked on the development of collaborative robots that facilitate the interaction of robots and operators, without the traditional physical barriers used in industry.

SIMBIOTS is a project that is part of the RIS3CAT Call and the “Indústries del Futur” Community. In this project, the strong collaboration between organisations in Catalonia: IRI, Eurecat, PAL Robotics, Promaut, and Zanini has been key to the project success. We interviewed representatives from some of the partner organisations that took part in the SIMBIOTS project to hear more about the work that took place and their thoughts on the project’s importance regarding Human-robot Interaction (HRI) in industry 4.0.

Guillem Alenyà Ribas, Director of the Institute of Robotics and Industrial Informatics CSIC-UPC told us, “The project has aimed to analyze collaborative robotics: when there is an interaction between a robot and a worker.”

“The two main goals of the project have been, on one hand, to develop the robot used in the project (PAL Robotics’ TIAGo), to make it a safer and compliance robot for industrial applications by including a range of new sensors.

“On the other hand, the other goal has been to study the collaborative processes: the task itself has to be collaborative – not only the hardware, but also the programming and how the robot understands the environment and conveys the task it wants to perform to the worker.”

Deep Learning and BehaviorTrees used by TIAGo in project demos

For one of the project demos, project partners Eurecat, PAL Robotics and IRI used emblems provided by ZANINI to prepare a demonstration, in which PAL Robotics’ TIAGo robot can be seen cleaning and manipulating the emblems part of a moving axis controller, helped by a human co-worker

To do this, TIAGo first navigated to the initial position in front of the device to be cleaned, detected the emblems using an RGB-D camera by “Deep Learning” methods, and with the use of “BehaviorTrees”, a hierarchical state machine based on AI, it was possible to coordinate all the necessary operations and generate optimal trajectories to clean the emblems.

Néstor García Hidalgo, Principal Investigator of Collaborative Robotics at Eurecat said, “Thanks to the SIMBIOTS Project, robots are able to work more emphatically and smartly with human workers. On one hand, we have left behind the old paradigm of industrial automation, where it was required to have each thing perfectly positioned. And now, the robot is able to adapt to the environment, detect where the objects are and even identify if there are any objects missing within the process.”

“Overall, the robots can now work hand in hand with their human colleagues, adapting their paths to avoid potential collisions; as well as improve the workers’ ergonomics without them having to stop their tasks.”

Safety and efficiency in robotics in industrial environments

When asked about the hardware amendments that have been made to the collaborative robot to achieve a safe interaction, Jordi Pagès, TIAGo Product Manager at PAL Robotics said, “thanks to the SIMBIOTS Project, that allowed us to use the TIAGo robot in industrial settings, as well as carrying out a certification plan so that the robot is able to operate in these environments performing collaborative tasks, this has allowed us to make a hardware evolution, designing the robot base and arm as well as the control architecture so that the robot can perform these collaborative tasks with humans, safely.”

Sara Cooper, Robotics Engineer at PAL Robotics added, “to achieve a safe interaction of the robot, both with the environment and with human workers, PAL Robotics has implemented admittance control. What this system does is measure the force detected by the sensor that is positioned on TIAGo’s wrist in order to adjust the position of the end-effector. Why do we do this? So that there is constant contact with the emblems to be able to clean them properly.”

“In addition, it ensures sufficient reactivity for the environment in which the operators work is safe, so that it is compliant in the event the arm makes contact with a human co-worker and minimizes harm. In particular, the Whole-Body Control package from PAL Robotics is used. An optimization system that allows us to assign different tasks based on predetermined priorities in order to avoid collisions with both the robot and its environment, as well as achieve position precision and admittance.”

With regards to ‘the most important aspect for an efficient human-robot collaboration in industrial environments and factories of the future,’ Albert Salinas, Plant Process Engineer at ZANINI Parets said, “until now, industrial robots used to work in isolation, as this carried certain risks. However, with the SIMBIOTS Project, it has been shown that robots and humans can work hand in hand, which opens up possibilities, allowing us to design more adequate and efficient workplaces.”

Applying developments of the project in industry 4.0 and the future

Guillem Alenyà Ribas, Director of the Institute of Robotics and Industrial Informatics CSIC-UPC concluded, “the road ahead now with SIMBIOTS is very promising. We are going to approach how the communication between humans and robots can be more intuitive, how we can ease the programming: introducing the robot in production lines; finalise the certification process, the part regarding the software; and in terms of research we have been focusing in a particular manipulation use-case, however, the application of the SIMBIOTS results can be done in a very wide range of fields, that would probably require a bit more of investigation but, overall, the potential exploitation of the results of the SIMBIOTS project is crucial.”

Take a look at the video we produced on Project SIMBIOTS here:

If you’d like to learn more about the early stage of the project SIMBIOTS, make sure to read our previous blog.

On the 26th of May PAL Robotics will hold a webinar and live demo, where we will focus on industry 4.0, intralogistics and Autonomous Mobile Robots (AMRs). Find out more here.

We will also present project SIMBIOTS at the upcoming event, Advanced Factories from 8-10 June in Barcelona. Advanced Factories is the industrial trade show where the latest solutions on industrial automation systems, robotics, and all technologies 4.0 associated with digital manufacturing are showcased. Find out more here.