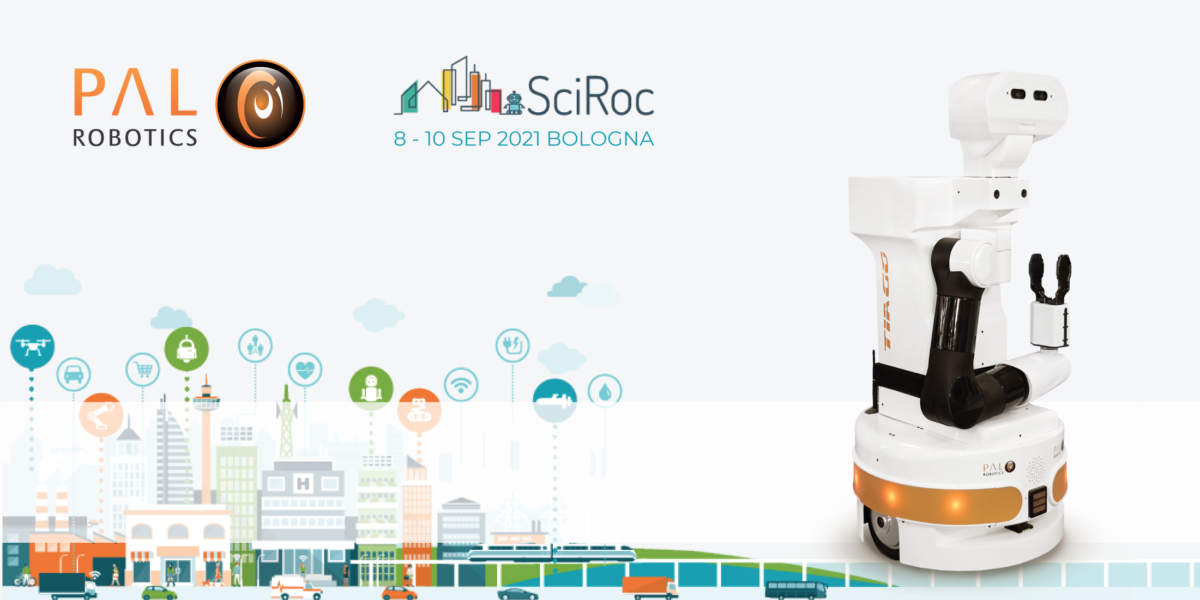 Following the success of the ‘SciRoc Challenge’ in 2019, last week the city of Bologna in Italy hosted the second edition of the robotics event. The ‘Smart City Robotics Challenge’ 2021 (SciRoc) took place at the spectacular Palazzo Re Enzo, in the main square at the heart of Bologna, and offered teams the chance to get together to compete on robotics challenges focused around the theme of ‘Smart Inclusion.’ Multiple international teams joined the competition, which was divided into a series of five episodes. Each episode consisted of a task to be performed by addressing specific research challenges for service robots within Smart Cities.

PAL Robotics was delighted to have the opportunity once again to support the SciRoc Challenge event as Platinum Sponsors, including sponsoring and supporting two of the event “episodes” each of which offered competitors a different challenge. We also gave teams the option to loan a TIAGo robot to participate with them in the challenge.

PAL Robotics is committed to supporting the ERL Consumer League, which includes the SciRoc Challenge. The ERL, with all of its leagues, drives competitors and the entire robotics field to innovate and problem-solve while promoting teamwork.

kicked off with an inaugural evening, and during the competition itself, our team was on hand to offer guidance to those competing in the challenge with the TIAGo mobile manipulator robot. The event finale included a public debate that covered the topics of Robotics, Smart Cities, and Smart Inclusion. Valentina Presutti  (Assistant Professor, Università di Bologna) acted as the debate moderator, and PAL Robotics’ CEO, Ferro Francesco took part, along with Daniele Nardi (Università di Roma – La Sapienza) and Olga Capirci (Research Director, ISTC-CNR).

Each event episode offered the option for teams to take part either in the live challenge in Bologna or remotely in simulation.

In this episode, the robot was assigned the task of assisting staff in a coffee shop to take care of customers. The robot was required to report on the status of all tables inside the shop, to take orders from customers, and to deliver objects to and from the customers’ tables. The functionalities that were evaluated here included people perception, HRI, and object recognition. This episode also addressed interaction through sign language. Robot capabilities needed for this episode included navigation, speech synthesis, camera (perception), and spoken language. Congratulations to the winning teams! Team Reply (Reply U labs) in the live challenge, and S.M.A.R.T. ( at New York University Abu Dhabi) in simulation.

Episode 02: Sign Language Generation and interpretation in a Coffee Shop

This episode was set in a retail environment and aimed to evaluate the capability of robots in interacting with a shopping cart. The episode was a joint effort between SciRoc and EU project Eurobench. Aspects evaluated here included geometry (such as staying close to a predefined trajectory), time, and force (e.g. smooth application of force to the handle). Congratulations on the winner of this episode which was Hybots (The Open University and Politecnico di Milano).

Episode 4 looked at the Delivery of medicines to isolated patients and in medical centers. In order for success here, the robot needed to move autonomously to where the patient was waiting in the mock health center set up. This included detecting possible obstacles in the way (static and dynamic), in addition to the robot interacting with the patient to deliver medicine and provide information on medicine dosage. Congratulations on the winner of this episode, Pathfinders (FH Aachen)!

This episode addressed the problem of picking products from a storage container and placing them on a designated shelf in retail. The domain was the operation of a grocery shop, where the robot helped to manage the inventory of a shop and organise products that had been delivered. Tasks needed to be completed using a fully autonomous robotic platform with mobile manipulation and perception capabilities (for example TIAGo robot). The robot needed to navigate autonomously in the environment, as well as to detect, grasp, and manipulate products in order to deliver them to the designated location. Congratulations to the winners, AutonOHM (Nuremberg Tech) on Shopping Pick & Pack, and Team Cranfield (Cranfield University) on Shopping Pick Functionality. 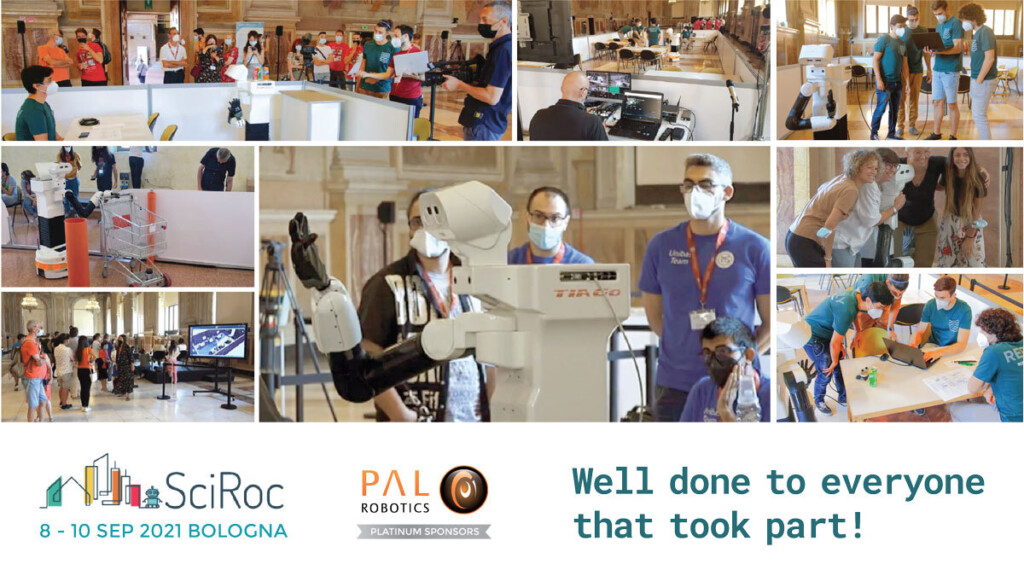 PAL Robotics’ TIAGo has taken part in many international robotics events and competitions, such as RoboCup@Home, The Mobile Manipulation Hackathon, and the SciRoc Challenge. The robot’s modularity and expansion opportunities are particularly useful for competitions. Teams can also connect extra devices to TIAGo to expand the robot’s capabilities even more, from extra microphones to extra cameras. This way, teams are able to adjust TIAGo’s skills to their specific needs and goals. TIAGo is 100% ROS-based with a public simulation model online along with a comprehensive set of tutorials that can be tried for free. 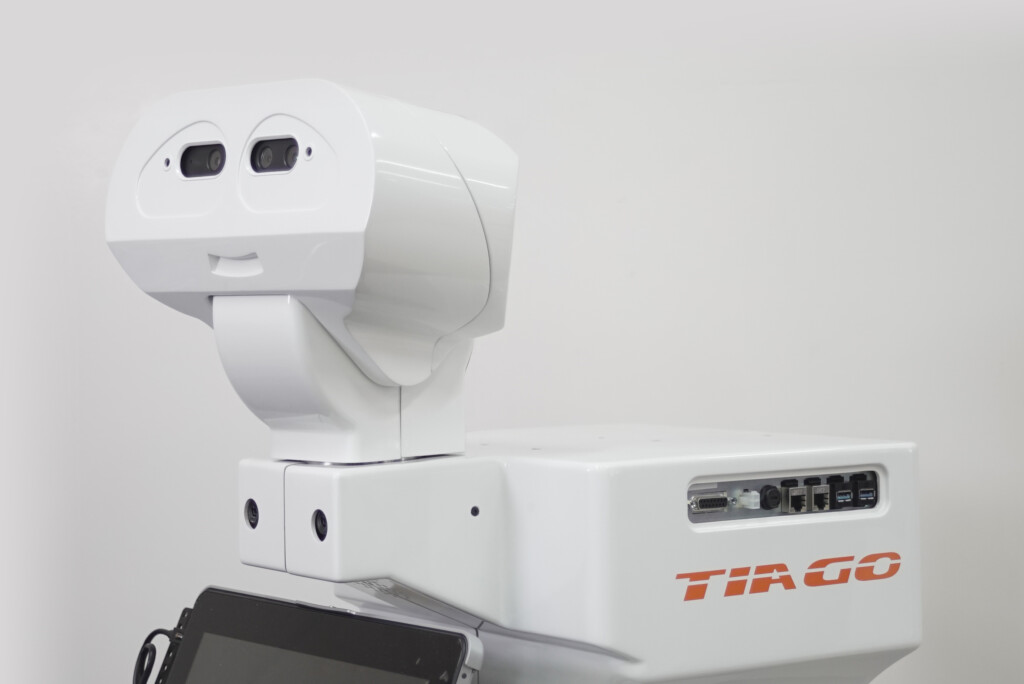 SciRoc is an EU-H2020 funded project supporting the European Robotics League (ERL), whose aim is to bring ERL tournaments into smart cities. The ERL is a framework for robotics competitions consisting of three challenges: ERL Consumer, ERL Professional, and ERL Emergency. These three challenge scenarios are set up in urban environments and converge every two years under one major tournament: ERL Smart Cities.

A key novelty of the SciRoc project is the introduction of robots in smart cities through ERL challenges and, in particular, the ERL Smart Cities, whose aim is to show how robots will integrate in the cities of the future as physical agents living in them. This adds a new challenge to ERL, with two Smart Cities Robotics Challenges (The SciRoc Challenges) in 2019 and 2021. read more about 2019’s SciRoc Challenge here.

We would like to thank the team at SciRoc, as well as Università di Bologna, Fondazione Alma Mater, and Fondazione Innovazione Urbana for hosting a great robotics event! We look forward to the next SciRoc Challenge! To learn more about the TIAGo and TIAGo++ robots and PAL Robotics, visit our website, and if you’re searching for project or event partners don’t hesitate to contact us – we are always looking for new opportunities to collaborate.