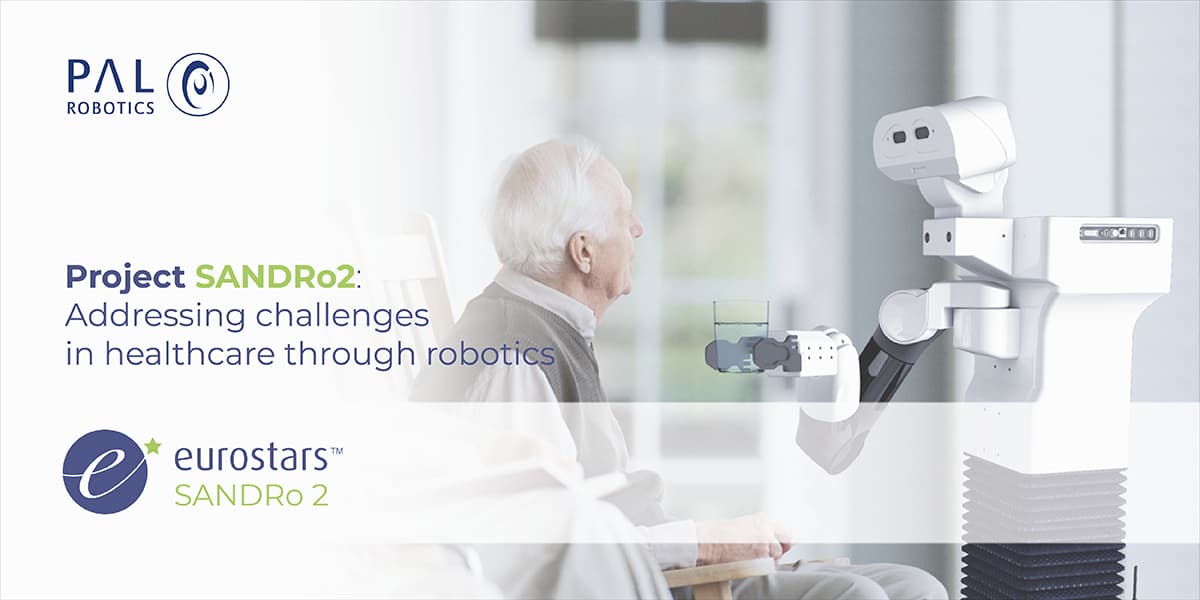 In 2021 PAL Robotics started a partnership together with HIT (Heemskerk Innovative Technology) and DN (DigiNova) to collaborate in SANDRo2, an EU funded project which aims to solve some of the main challenges the healthcare sector is facing: including reducing heavy workloads while maintaining high-quality services, and addressing the increasing shortage of care personnel.

SANDRo2 has the goal of providing support services to older patients and individuals with difficulties in activities of daily living (ADLs). The SANDRo2 robot will autonomously patrol the halls of a care facility during project pilots, acting as the first responder to any client calls. The robot will also learn to perform a task autonomously after the operator performs it, using learning by demonstration. In addition, the operator will also be able to teach the robot new social behaviours, such as addressing clients in the most appropriate way.

PAL Robotics’ role in SANDRo2 is to develop the hardware for the project, by adapting PAL Robotics’  TIAGo robot to meet project needs. The goals are to improve the traction and suspension of the robot during locomotion, make advances in navigation with these types of systems, and develop a new gripper for the mobile manipulator robot, TIAGo that handles tiny objects.

During the SANDRo2 project, we are studying the design and creation of a new advanced gripper for handling small objects, as well as an improvement to the low-level control of the arm and its software infrastructure. In order to control the clamp with a high level of precision and repeatability and to make the necessary adjustments to the arm, this is essential. Aside from this, to reduce the risk of infection, during the project we are investigating the use of novel coating materials for TIAGo robot’s self-cleaning.

One of the challenges we have had to overcome during the project was to design and build a base robot able to traverse door thresholds and elevator gaps in care settings. This need was one of the factors that helped to contribute to the development of the autonomous mobile robot, TIAGo OMNI Base, an omnidirectional base robot that moves in all directions with ease thanks to its precision positioning in constrained environments. The robot operates as a standalone base, or with a TIAGo robot upper body.

The SANDRo 2 project started in the summer of 2021, and is being developed gradually in four phases. At the beginning of January 2023 we started the third phase:

The software and the hardware developed during the project will be cyclically tested and validated in real care environments through user tests, with support from healthcare institutes and academic partners in the Netherlands and Spain.

PAL Robotics is taking part in this project together with the mobile manipulator robot, TIAGo which combines perception, navigation, manipulation & Human-Robot Interaction skills out of the box. TIAGo’s abilities open up many possibilities for applications in healthcare and industry, and as a standard research platform for manipulation, perception, and autonomous navigation.

TIAGo++ is a member of the TIAGo family available with a mobile base, a lifting torso, and two articulated arms with dexterous hands. Due to its changeable end-effectors, the robot TIAGo++ can be easily deployed in different tasks on the manufacturing line, such as quality checks, and collaborative tasks (loading and unloading) together with human operators.

TIAGo OMNI Base is an omnidirectional base robot with mecanum wheels, and two LIDAR sensors for an unobstructed 360º FOV secure movement, and is suitable for autonomous navigation, obstacle detection and path planning. Read more about the autonomous mobile robot, TIAGo OMNI in our previous blog post.