Multiple robots and humans working together in project Co4Robots 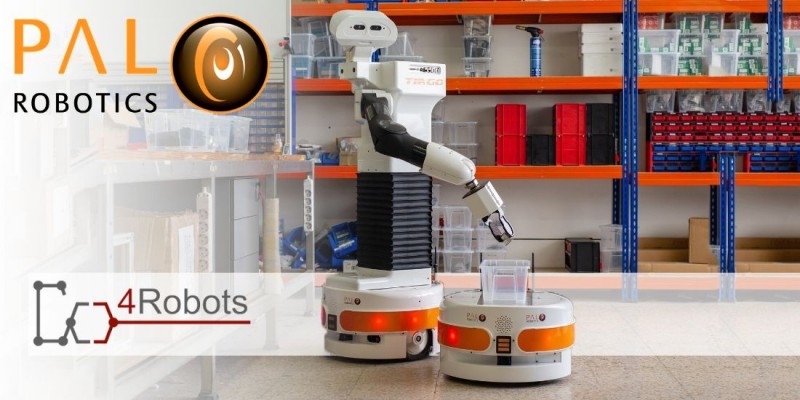 PAL Robotics has been part of a team of project partners working on the European project Co4Robots, to build a framework that supervises and coordinates multiple robots and humans working together (including robots with different capabilities) to accomplish required tasks.

Currently, robotic planning is often done in advance and doesn’t take into account robots working in dynamic and crowded environments which are more complex. With more traditional robotic systems, in order to operate in a more complex environment, there would often be the need for human intervention for robots to continue functioning properly.

The Co4Robots project has been aimed at development of Factories of the Future, with multiple robots and humans working together; robots with different capabilities must work together safely and productively, including with humans, to achieve tasks such as object handling, transportation and delivery of objects.

This successful project that started in 2017 will soon reach its conclusion. PAL Robotics’ lead Engineer on the project, Dr. Alessandro Di Fava says of the work that has taken place:

“For PAL Robotics, the key successes of the project have been related to the opportunity to test multiple robots in a complex scenario, in an environment that is constantly changing and with interactions between different agents.

This will have an impact on robotics in the sense that the work has focused on decentralizing the control and coordination of heterogeneous robots. So, for instance, if a robot happens to fail from doing a task, another robot can notice it and go to the rescue. Saving time and optimizing resources will be best achieved if all the platforms are integrated into a multi-robot system, even if different developers create each robot.

It has been a pleasure to collaborate with the Co4Robots consortium both for their passion and skills that they have brought to the project.”

The ‘‘Co4Robots’’ project has included the achievement of various delivery milestones, including multiple robots working together. The aim here has been to address the challenge of how diverse robots collaborate. PAL Robotics TIAGo and TIAGo Base robots have participated in project testing ‘milestones’, alongside other robots.

The scenario for milestone 2 revolved around three robotic entities – a mobile manipulator, a static manipulator and a mobile robot – interacting with each other, with an object that could be grasped, and also with the environment.

Overall goals of the project Co4Robots

The goals of the project have been to build:

Projects such as Co4Robots enable the team at PAL Robotics to continue to develop and adapt our robots to better meet the needs of the future, for example following this particular project, key developments proposed are:

In addition to the Co4Robots project, PAL Robotics works on many more EU-funded projects, visit our collaborative projects webpage to find out more. Next month (June 2020) is the deadline for ICT project calls, if you are looking for a partner, don’t hesitate to get in touch with us.