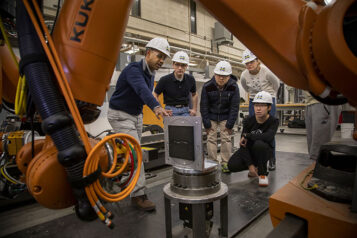 As part of a $2 million National Science Foundation Grant, robots from KUKA Robotics are helping the University of Michigan (U of M) advance research that could result in robots working side-by-side with humans on building construction sites. The research involves three KUKA KR QUANTEC robots along with the company’s robot sensor interface (RSI) software, all of which will allow human workers to use interactive task learning technology to teach the robots to perform construction tasks.

The resulting symbiotic human-robot teams could then be widely deployed in the construction industry. The future human construction worker would then be responsible for high-level work planning and would transition to the role of robot programmer and supervisor. The robot would perform physically strenuous tasks and collaborate with the human supervisor to improvise when unforeseen work conditions are encountered.

The three QUANTEC KUKA robot models used across two labs at U of M are the KR 120, KR 60 and KR 6. For the research, the KR 120 is mounted on an external gantry while the KR 60 is on essentially a mobile hydraulic excavator platform. The KR 120 would be used for factory prefab/pre-manufacturing of construction assemblies, and the KR 60 would be the robot that would travel to job sites.

KUKA’s KR QUANTEC line of robots applies to a wide range of applications and provides high performance, cost-effectiveness and flexibility. Such an expansive robot portfolio also offers U of M the capability to upgrade payloads in the field as well as apply software add-ons to adapt to changing applications.

What makes the construction application a challenge is the unstructured and changing environment in which the robots will work. In addition to the KUKA robotics, other automation technology that will help U of M overcome this challenge and make its research goals a reality includes various automation software packages, sensors, point cloud scanners, tool mounted laser scanners and vision systems. The sensors and scanners ensure complete safety in the construction environments where humans will be present, but not working in extreme proximity to the robots. However, if an individual does approach, the robots will slow their speed until it is safe to resume normal work pace levels once that person is clear of the area.